Forex or FX is the foreign exchange market or currency market, which is a worldwide decentralized over-the-counter financial market for the trading of currencies. Financial centers around the world function as anchors of trading between a wide range of different types of buyers and sellers around the clock, with the exception of weekends. The foreign exchange market determines the relative values of different currencies.

The primary purpose of the foreign exchange market is to assist international trade and investment, by allowing businesses to convert one currency to another currency. For example, it permits a US business to import British goods and pay Pound Sterling, even though the business's income is in US dollars. It also supports speculation, and facilitates the carry trade, in which investors borrow low-yielding currencies and lend (invest in) high-yielding currencies, and which (it has been claimed) may lead to loss of competitiveness in some countries. 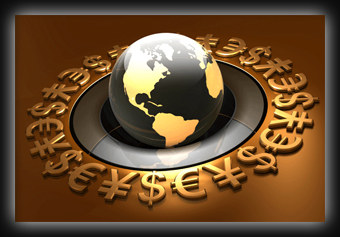 Forex has been referred to as the market closest to the ideal of perfect competition.

The foreign exchange market is unique because of its

The foreign exchange market is the largest and most liquid financial market in the world. Traders include large banks, central banks, currency speculators, corporations, governments, and other financial institutions. The average daily volume in the global foreign exchange and related markets is continuously growing. Daily turnover was reported to be over $3.2 trillion in April 2007 by the Bank for International Settlements. Since then, the market has continued to grow. According to Euromoney's annual FX Poll, volumes grew a further 41% between 2007 and 2008.

Of the $3.98 trillion daily global turnover, trading in London accounted for around $1.36 trillion, or 34.1% of the total, making London by far the global center for foreign exchange. In second and third places respectively, trading in New York City accounted for 16.6%, and Tokyo accounted for 6.0%. In addition to "traditional" turnover, $2.1 trillion was traded in derivatives.

Unlike a stock market, the foreign exchange market is divided into levels of access. At the top is the inter-bank market, which is made up of the largest commercial banks and securities dealers. Within the inter-bank market, spreads, which are the difference between the bid and ask prices, are razor sharp and usually unavailable, and not known to players outside the inner circle. The difference between the bid and ask prices widens (from 0-1 pip to 1-2 pips for some currencies such as the EUR). This is due to volume. If a trader can guarantee large numbers of transactions for large amounts, they can demand a smaller difference between the bid and ask price, which is referred to as a better spread. The levels of access that make up the foreign exchange market are determined by the size of the "line" (the amount of money with which they are trading). The top-tier inter-bank market accounts for 53% of all transactions.

After that there are usually smaller banks, followed by large multi-national corporations (which need to hedge risk and pay employees in different countries), large hedge funds, and even some of the retail FX-metal market makers. According to Galati and Melvin, "Pension funds, insurance companies, mutual funds, and other institutional investors have played an increasingly important role in financial markets in general, and in FX markets in particular, since the early 2000s." (2004) In addition, he notes, "Hedge funds have grown markedly over the 2001-2004 period in terms of both number and overall size" Central banks also participate in the foreign exchange market to align currencies to their economic needs.

Internal, regional, and international political conditions and events can have a profound effect on currency markets.

All exchange rates are susceptible to political instability and anticipations about the new ruling party. Political upheaval and instability can have a negative impact on a nation's economy. For example, destabilization of coalition governments in Pakistan and Thailand can negatively affect the value of their currencies. Similarly, in a country experiencing financial difficulties, the rise of a political faction that is perceived to be fiscally responsible can have the opposite effect. Also, events in one country in a region may spur positive/negative interest in a neighboring country and, in the process, affect its currency.

Market psychology and trader perceptions influence the foreign exchange market in a variety of ways:

Controversy about currency speculators and their effect on currency devaluations and national economies recurs regularly. Nevertheless, economists including Milton Friedman have argued that speculators ultimately are a stabilizing influence on the market and perform the important function of providing a market for hedgers and transferring risk from those people who don't wish to bear it, to those who do. Other economists such as Joseph Stiglitz consider this argument to be based more on politics and a free market philosophy than on economics.

Large hedge funds and other well capitalized "position traders" are the main professional speculators. According to some economists, individual traders could act as "noise traders" and have a more destabilizing role than larger and better informed actors.

Currency speculation is considered a highly suspect activity in many countries. While investment in traditional financial instruments like bonds or stocks often is considered to contribute positively to economic growth by providing capital, currency speculation does not; according to this view, it is simply gambling that often interferes with economic policy. For example, in 1992, currency speculation forced the Central Bank of Sweden to raise interest rates for a few days to 500% per annum, and later to devalue the krona. Former Malaysian Prime Minister Mahathir Mohamad is one well known proponent of this view. He blamed the devaluation of the Malaysian ringgit in 1997 on George Soros and other speculators.

Gregory J. Millman reports on an opposing view, comparing speculators to "vigilantes" who simply help "enforce" international agreements and anticipate the effects of basic economic "laws" in order to profit.

In this view, countries may develop unsustainable financial bubbles or otherwise mishandle their national economies, and foreign exchange speculators made the inevitable collapse happen sooner. A relatively quick collapse might even be preferable to continued economic mishandling, followed by an eventual, larger, collapse. Mahathir Mohamad and other critics of speculation are viewed as trying to deflect the blame from themselves for having caused the unsustainable economic conditions.